“DevOps is not a goal, but a never- ending process of Continual Improvement” — Jez Humble

Now there are various definitions for Devops , apart from being the Buzz word on the internet — it is Development + Operations.

To break this all — Development team and Operations team comes together breaking the all- This concept is called DevOps. The infinity symbol suggests that it is a continuous process improving efficiency and constant activity.

DevOps is not a tool, not a software, not a programming language. DevOps is more of a mindset — the way how you take your product or app from the development stage to the production stage. So its basically a concept that is used in the application lifecycle management and makes sure that the development side and the operations side are working in sync towards what product the end user has claimed.

The feedback received after this phase is sent back to the planning phase. This is what forms the core of the DevOps lifecycle — That is the INTERGRATION PHASE .

Jenkins is the tool for building and testing.

If the code passes the test then it is sent for deployment and this is referred to as continuous Integration.

There are many tech Giants who have opted for Devops 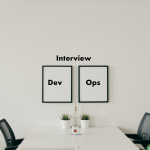 How to get prepared for DevOps role | Interview! ?DevOps